Number One turns thirteen today. A major step for her, becoming a teenager. A sign too, her Mother and I have taken a fair few steps of our own.

Many people tell us this is where it really begins. Parenting. Throw out all we know and think we know. Disregard everything we have learned and been taught. Nothing is relevant, nothing holds true, once those mystical teen years are reached. The best of it and the worst of it, so we are told. Well if it is to be the best, these following teen years, then they are going to have to prove to be pretty darn exceptional.

Don’t get me wrong, Number One is as moody, surly, grumpy and snappy as any other kid her age. Possibly a bit less, she seems to sail on a fairly even keel. The mood swings are no more or less than what you what might expect from any other person on the planet, man, woman or child, boy or girl. Yes, only the beginning you might say, just you wait. But I won’t be holding my breath.

Change is coming. In fact, the ‘change’ has been on us for a while and so far, he says with digits firmly crossed, life has gone on. Maybe that is the key. Not Number One, not her Mother, not me or the other siblings or anyone I can think of, has made any fuss. Barely any comment. After all, what is there to say? What is there to make a big deal out of? A Human Being growing and developing and aging, whatever you want to call it, is hardly a surprise.

Long may Number One continue to sail smoothly but even I can’t deny there is a change in tide ahead for her and consequently, for all of us. High school will play a big part. Her social scene will change, her horizons will be broadened academically, recreationally and socially. There will be more involvement in  this and that and the next thing. She will, hopefully, chop and change, experimenting with the new horizons and directions available to her and all the while, learning.

Teenager or not, all I can do as a parent is listen. Step one. Beyond that, I can be empathetic, try to be understanding and patient and caring and maybe, just maybe, Number One will continue to see me as an option, a real and genuine one, when she is in need. Having said that, I am fairly certain things are going to crop up she will not want to bring to her Dad, go to parent or not. And I know for sure, there are going to be things I would rather deflect, fend some issues and concerns off, send them in the direction of mother dearest. Probably best for all concerned.

As parent’s we are not ones to tip-toe around subjects. Ask a question, we will give our children an open and honest answer. Transparency is a policy we are fond of and the basis of our approach to teaching our crew the things they can’t, don’t or won’t learn at school. There are however, some things, topics and subjects I am not so sure I am all that interested in covering. The ‘Talk’ for example. School touches a bit on the birds and the bees. I have a get out clause, one which I fully intend to invoke. ‘Your Mother is a health professional, a Midwife no less…you want that info, she knows better than I, ask her.’

I am not entirely sure how I will deal with the subject of boys. Not an issue yet and I can only hope I don’t come up with some cliched rubbish about porches and rocking chairs and rock salt cartridges, loaded into double barreled shotguns. I don’t even own a shotgun. Take note though, any would-be suitor…I do own a high powered rifle and we have a loving, caring and protective dog…as old and grumpy as I am.

There is no doubting the introduction of a teenager to the house will mean a shift in dynamic. Numbers One and Two have always bickered and bitched and winged and moaned at each other. They are two distinct and different people, who by and large get on pretty well. Without being aware of it, they are actually fairly reliant on each other. It will be interesting to see the inevitable shift in their relationship. The younger two,         E-Bomb and Wee-Man, turn to their eldest sister more than any of them might realise. She is a source of respite, for both those two little ones and me. An engaging, involved, interested and interesting part of their lives. How much her own life, evolving and burgeoning and all those sorts of words, will impact on those relationships I guess only time will tell.

I must admit, I lean on Number One a bit. I rely on her, to give me some breathing space, so that I am not completely lost as an individual in this family. I suppose I run the risk of alienating her, having her resent the role she plays, fully aware of it or not. As I have said though, she is engaged and engaging, a very active part of the lives of all of us. For that she gets recognition and, both now and in time, finds reward. The adoration of her little brother, the appreciation of her Father.

We have treated and continue to treat all our children like little people, not inferior or incomplete. Just young. People. We communicate with our kids as the individuals they are. Our efforts to do that won’t change just because there is teen at the end of their age’s. I like to think we have been, as parent’s, pretty good listeners over the years and good communicators too. Not ‘tellers’ but talkers and explainers and debaters, as open to what they have to say, as they need to be to what we are trying to impart. I look forward to Number One expanding her thoughts, her opinions, her ideas and ideologies. My only concern is if I can keep up. 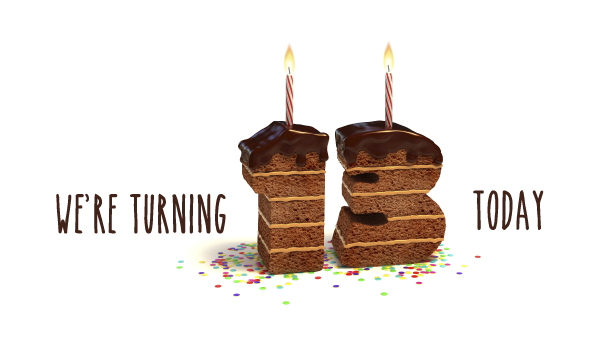 Today is about cake and treats and presents, phone calls from relies, candles and all the rest. We will make a fuss, we will cuddle and tell each other how much we love the person wrapped in our embrace. No matter her age, Number One will be spoiled, because we love her. We love her pimples and her mood swings and her sour tiredness, no matter the length of the sleep-in. We love her growth spurts and her desire for more independence and her failures and her advances and we love her argumentative streak and her stomp out of the room and her sense of humour and her growing intuition and her developing awareness, both of self and the greater, wider world.

You really are Number One.