You know that guy? I’ve almost become ‘That Guy’

You’ve all seen him. Maybe he is your boss, maybe he is a colleague.
Perhaps he is your neighbour, your mate, your brother. You might be married to him, he might be your Dad. Whatever the relationship, That Guy is instantly recognisable. Especially at this time of year.

That Guy isn’t hard to spot. Look for him coming out of the dairy. He’s the bloke in the faded t-shirt, the one he bought from the stall outside that concert he went to twelve years ago. He might be balding, at least have a receding hair line but it’s hard to tell, because he is wearing a cap, the brim of which is where his sunglasses sit.
That cap is emblazoned with the logo of a supplier, a client, a local business and was probably free. There are sweat stains if you look close enough.

That guy is a good guy. He will nod at you in a gesture of friendliness. He might mutter a g’day, maybe apologise briefly as you squeeze by each other in the convenience store doorway. He won’t wave. That Guy can’t, his hands full with fistfuls of already melting ice-cream cones of various flavours. That Guy hopes he remembers who asked for what flavour.

You won’t see much more of That Guy. You’ll hear him, exasperatedly repeating himself until one of the kids in the SUV or double cab ute acknowledges his returned presence, stops bickering with it’s siblings and opens the door for their Dad, in their own sweet time. A puff of diesel and he’s gone.
To the batch you wonder? The beach? Is there a chilly bin the back of that family friendly multipurpose vehicle packed with steaks, fish, cheesy sausages for the kids? Maybe in the tray, on the roof rack, there is a kayak, boogie boards, snorkels and masks and fins and a change of clothes Mrs That Guy thought might be necessary. On the side and rear of that ute the name and number of a concrete placer, a landscaper, a sales rep, a plumber.

That Guy is, apart from maybe a touch of middle aged spread, a healthy and strong man. He is physical, with meaty, calloused hands. Broad across the shoulder, nearly as thick in the chest as his belly is becoming. That Guy is in his forties, maybe early fifties,or close enough to it. That Guy is tanned.
Mostly

That Guy has burned under the hot, unforgiving NZ sun once or twice already this summer. That Guy burns every year, his strong back reddening as he turns over the veggie patch, coats the deck, starts up the lawn mower for the first time this season. His skin has coloured accordingly, the way That Guy secretly wanted it to even while telling the kids to be sun smart.
Still, his skin tone over his back and chest does not match the deep, man of the outdoors tan on his forearms. And that dark colour, is a long way from the shade of his ankles and feet.

Right where the top of his woollen work socks stop, the ones That Guy rams into his steel capped work boots, is right where all colour ceases to exist. Here, the glare of bright, lens tightening whiteness begins.
Like a badge of honour, That Guy is advertising the fact he is on holiday. Those pearly white toes, shinier and brighter than any celebrity could hope their perfect rows of teeth could ever be, mean summer is finally here, the kids are out of school, That Guy and Mrs That Guy have coordinated their time off and the holiday season has rolled around.

That Guy will be at a steady 104km/h before the proportion of cone exceeds ice-cream. The kids will still be quiet in the back, glad for the treat, breaking up the monotony of the annual trip to wherever to do whatever. Mrs That Guy will be handing out the wet wipes she still buys, just for such a sticky emergency, even though she hasn’t changed a nappy in years.
That Guy will turn off the air-conditioning and put the windows down, telling everyone how much he hates aircon anyway. The fresh air and breeze is nice, even if the temperature rises nearly as much as That Guys, the queue of caravans and motor-homes and trailers and boats the real reason he deemed it okay to have through breeze.
That Guy will reluctantly switch the cricket off, fuss with the bluetooth, struggle to get anyone else interested in a game of eye-spy, a desperate attempt to recapture the rose tinted nostalgia of his own childhood road trips.

While Mrs That Guy wonders for the third time if she remembered to turn off the oven, asks again if That Guy locked the garage door behind him, That Guy fights off thought of early to mid January, when he will be back laying concrete, building, plumbing or managing it all.
Mrs That Guy will wonder out loud if her sister /brother/uncle/grandparents will beat them to their shared destination. Mr That Guy will wonder to himself if the nephews and nieces are still the spoiled little shits he remembers from the last holiday and whether it is the parenting to blame. Or has he got this lot confused, are these the cute ones, the fun ones?
That Guy loves them all regardless and is determined to give them the holiday from which life-long memories are made.

That Guy settles in the 70-80km/h average he was hoping they would avoid by leaving early. Not as early as he had planned and hoped for but hey, at least the kids hadn’t put up a fight.
Now That Guy is thinking tackle and bait. He is thinking sizzling steaks and lukewarm beers and maybe a good book and snoozing in the shade.
That Guy pretends he can’t hear the moans from the back seat as he kills the bluetooth and tunes in the cricket. 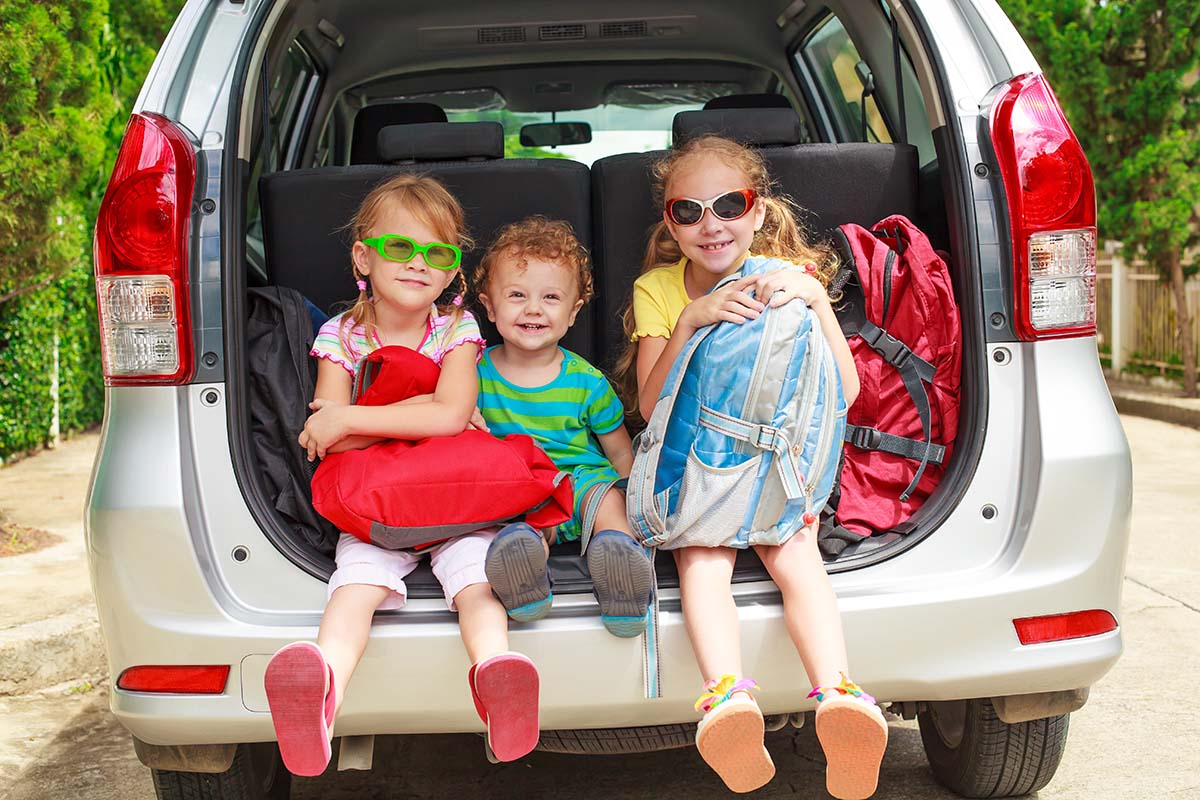 School holidays have arrived and contradictory to popular opinion, it is not the headache inducing time of year many people make it out to be.

Admittedly, the winter break is that bit more awkward. If the weather doesn’t come to the party, you can be screwed. A bunch of misfit, stir-crazy nutters, running around in the house, as frustrated as they are frustrating.

Solution? Shunt them off to their Grandmother.

That is what we did and, for the last nine days, numbers one and two have been down south.

Yep, that’s right, middle of winter and we pack our northern kids off to cold southern climes. We leap to the top of the parenting tree right there.

To make matters worse, it isn’t the first time we have done it.

A big shout out to Air New Zealand and their wonderful service for unaccompanied minors. This is the second time we have wrapped the girls up and bundled them off on their own. A big adventure they get very excited about.

Rightly so. They are travelling virtually the length of the country. It is all day journey, by the time we take the four hour drive to Auckland airport from home. The length of the latest excursion was exasperated by the thunder and lightening storms delaying all and ever flight.

The warning signs were all there. Dark, rolling clouds, smothered the city-scape in a sense of foreboding, then that first look at the departures board, highlighted by delays and cancellations.

Just a note to the few grumpy bastards, who seemed to be desperate to jump on a plane and go flying throw streaks of lightening, obviously desperate to be a part of the rolling clap of thunder. Leave the lady on the desk alone. As much control as she has over the status your journey, she has none over the weather. I was sitting there with two children growing ever more restless, impatient and nervous. Yet not a peep. There were other families too, in the same predicament, three or so hours into what turned out to be a four hour wait for boarding. One group in particular, young kids, not a problem; cool, calm and collected. Get a grip people.

That’s right, we are in Auckland Airport and have been for hours longer than we expected. The threat of boredom and restlessness abounds. No worries, nothing a bit of junk food can’t cure.

Allowing our big girls the opportunity to develop and progress by feeling brave and responsible, is awesome. They are monitored and watched and accompanied and thoroughly looked after on a journey such as the one they have just undertaken, but at the end of the day, they are doing it all on their own…and loving it.

I guess it felt a little like we are loosening the reigns, but that is sanctimonious drivel. We are not that progressive as parents, not that open and honest and positive in and of the world. Certainly not when it comes to throwing your kids out among it. We are all for a bit of a sink or swim attitude, the throw them in at the deep end approach. Only when the appropriate safety nets are in place.

So right there is the first dose, the first flush, of pride. I bundle my first and second born beloveds onto the delayed flight, with who knows what form of convoluted travel plan ahead of them, with nothing more than a brief hug and a peck on each cheek. Not single a tear shed. Not even from me!

The next shot in the arm for my charming dearest and myself, the next ego boost, the next confirmation that despite all the pitfalls, all the mistakes and the lessons we have failed to learn, despite the lack of patience and our inability to fully empathise with the coming generations, even the ones we have created, it seems as if we may have gotten a few things right. At least according to other people.

I’m not naive. I know it is the way with most kids. Out of sight of Mum and Dad and they are sweet, loving, kind, caring and courteous little angels. Not exactly polar opposite from the fallen, crooked halo celestial beings we know and love.

When the confirmation comes from a source that, while you don’t crave their approval, it is bloody nice when you get it, you can only feel a swell of ‘Damn skippy, you know it!’

Fast forwarding (picture the video tape era, with its flickery, scrolling screen, not the digital swish of the modern ear) and we find ourselves over a week down the track and the kids are nearly all set for the return journey home.

Speaking of the digital age, having the crew being able to update us back of their holiday, virtually every step of the way, was awesome. Girls One and Two were kept well entertained by their Nana and love hanging with their cousins. By all accounts, temperature aside, a good time had by everyone.

I get a message from the the girls Nana, not unexpected and full of all the stuff you would want to hear; had a great time, was a pleasure, will miss them. It was one particular line buried in the message that caught me thought. One thought, one sentiment. One compliment. My mother told me that my girls were a delight…expected, we knew that already.

My Mother, Grandmother to my children, told me that my kids were a credit to us.

To us. Their Mother and Father.

Not a big moment. A massive one. A little trigger in the chamber of life, letting us know we have loaded our kids well and, when the time is right, when our aim is true, we can fire them down the barrel, out into the world.