I am not a great follower of the media.
My family life, home life and work all take precedence over what is happening on a current affairs level.
It stands to reason too, the way news is accessed these days has changed. I have read and heard much of what is occurring on a day to day basis, long before the six o’clock news.

As it stands, we don’t have a freeview box or sky in our house. To watch the news, we would have to stream it but at that time of the evening, our main meal is being prepared and eaten. The world can be doing whatever it wants, Wifey and I have four growing mouths to feed and there is nothing which will stand in the way of a hungry child.

Like most people, I am a fan of the distracting escapism a good movie or series can provide. Music plays a big role in my life and forms, in large part, the entertainment I might seek at any time.
If ever I do access any given media outlet, it is usually to find results on, or to follow live, one sporting event or another. Sports is the other thing I find a valuable entertainment.
Late last week would have seen the end of the test match between New Zealand’s Black Caps and Bangladesh. Ok, the game might not have stretched that far, given the current form of the respective sides but it’s cancellation, for obvious reasons, was a sad way for our international summer of cricket season to end.

I work in a rural location. I don’t have access to the AM network and I don’t have reliable cell phone coverage for streaming purposes etc. I do have FM capabilities on my phone and over the last week I tuned to Magic Talk.
The station, previously known as RadioLive, is part of the Newshub collection and in the past has captured my attention, as much for it’s presenters and hosts as for content. I am a fan of the input someone like Marcus Lush has on our airwaves, found a guy like John Tamahere refreshing, whether I agreed with him or not.

Those names have gone, however I was pleased to hear the tones of Brendon Telfer when I tuned in to Magic Talk, sitting in for Peter Williams.
Telfer is an intelligent man, thinks before he opens his mouth and has a broad range of tolerant opinions. He is a broadcaster who has been in the business for many years and as such, is an opinion I trust and a voice I was able to find comfort in.
I love the energy and vitality Duncan Garner brings, even if I at times don’t agree with him, and the balance he gets from the likes of Amanda Gillies, someone I feel is one of the better broadcasters and journalists out there currently. 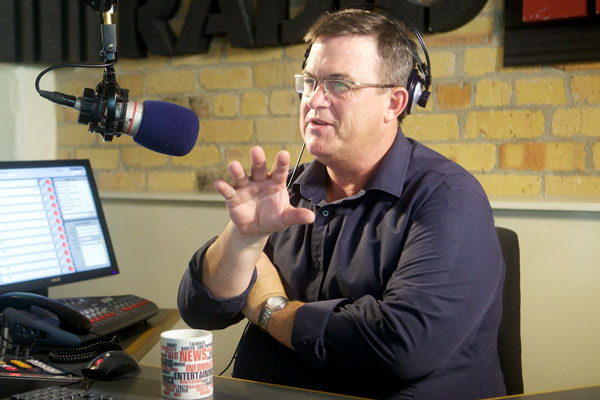 And then there is Sean Plunket.
A strong, forthright, highly vocal and independent voice. A man I personally have struggled to like or listen to at times in the past.
Yet, conversely, he turned out to be the person who helped me the most to reconcile things over this last week.

I work alone predominantly. I have flora and fauna for company but can go days on end with little or no human companionship. I love it.
The problem with spending so much time on your own is the intensity your own thoughts can reach. Luckily, I have become very adept at moderating myself, tempering the type and direction my brain can travel. While it is fun to let the mind wonder and ramble, it can also be disconcerting and distracting.

Self moderation and tempering were just two of the traits exhibited by Sean Plunket, a man no stranger to courting controversy.
During his broadcasts, he was able to remain strong yet empathetic. He could lend a sympathetic and caring ear, take a breath, then be vehement.
I listened as the man crossed all sorts of emotional barriers, as we all were doing, yet he did it openly, in the public eye so to speak and he did so with a measure of reflective realism.
He was hurting, just like us and just the same as his colleagues. What a job they are tasked with, when the world suddenly crumbles around them and human tragedy is before their lenses, cries of anguish and fear and the wails of pain at he end of their microphones.
I have already praised the police, feel there is a need to strongly acknowledge the leadership of Jacinda Ardern, her government and the all the members of parliament. And now praise for our collective media.
Have we ever been so together?
We can thank that man for that.

Our media has played a key role in that leadership. Bipartisanship to the fore in our political realms and also in our newsrooms. Ego put aside, agenda’s postponed or cancelled altogether.
Plunket had the finger pointed at him. It didn’t take long for things to get personal, then political, despite the urging of the man himself.
Plunket stayed pious throughout but I fear was always fighting a losing battle. Hideous things were leveled at him as if his ilk, social commentators like him, somehow had blood on their hands, that he was as responsible if not more so, than the foul person who pulled the trigger many times over.

Through it all, Plunket, just as many others were doing, used his platform to spread a message of tolerance, of peace and love. He spoke of a commitment to togetherness, he stayed reasoned and calm, even as his voice cracked.
How the hell he stayed so strong ow any of our media representatives did, I really don’t know. One and all of them get my respect, from the sound dude to the camera operator to the presenter to the makeup people to the producers…a big heart felt thanks.

Sean Plunket sounds like a smoker. He sounds like he is not a bloke I might have a lot in common with. He sounds like a guy I would end up arguing with.
I reckon he is a guy who will buy me a beer, half way through that argument. He will gladly accept one in return and I think, if I saw him in that same bar a week or so later, we would be at it all over again.
A beer, a debate, even an argument.
A shake of the hand, a laugh and a smile.

To Sean Plunket….
Not sure I could have done it without ya mate. Not alone like I was.
But I didn’t have to go far to find a bit of support. I just turned on the radio. How old fashioned, how quaint.
Of course, I spoke with my wife, other members of my family, my employers and friends. People just as lost, hurt and confused as I was.
I imagine there is a someone for everyone at times like this. The days we have been through as a nation over the last week, proved just how wrong the gunman got it, just how perverse the response to an act of terror can be.
How unifying.

Now is a time for reasoning. For conversations to take place.
I needed a voice to guide me, to moderate me, to help me. As much by coincidence as anything else, Sean Plunket provided that voice.
I will never forget that, as much as the events of the 15th are indelibly printed on my brain.